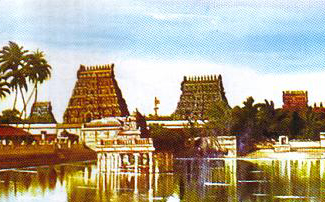 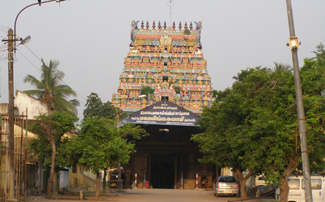 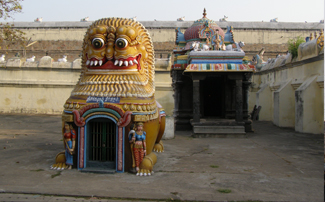 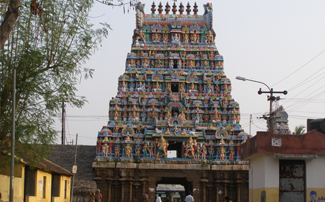 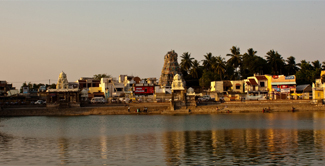 It is a very peaceful city and the festival of Mahamaham is celebrated every 12 years at the Mahamaham tank in Kumbakonam. This is one of the few places in India which has a temple dedicated to Lord Brahma. The town is known for its temples, intricately carved Panchaloha idols, exquisite brass wares especially lamps, silk and betel leaves. The town has also been well - known for its prestigious educational institutions which have turned out eminent stalwarts in diverse spheres. The town is famous for brass vessels. ...

Lord Siva was unhappy with Sri Uma mangai Devi and cursed her to live as a cow in earth. She repented on her action and to absolve of her curse, goddess prayed to Lord Siva. Lord Siva controlled his anger and blessed Her by changing Tirumagal, Kalaimagal & Indirani as cows and to accompany Sri Umamangai Devi in the earth. Pleased by the milk showered on his body by Sri Uma mangai Devi as cow Lord Siva Married her at Thirumananjeri. This temple is constructed by Chola Queen Sembiyanmadevi during Chola Dynasty. Its being referred Thevara song by the Gnanasambandhar and Thirunavukarasar. This story behind God and Goddess took...

Thirunageswaram Raghu Temple, Naganathaswamy Temple (Sri Raaghu Sthalam), at Thirunageswaram near Kumbakonam in Tamil Nadu is one of the rare temples in India dedicated exclusively to Lord Rahu one of the Navgrahas. This magnificent Temple is Situated 7 km east of Kumbakonam, in Tanjore District,Tamil Nadu. Temple occupies an area of 630 feet South-North and 800ft East-West with adjacent sub lanes and four major streets