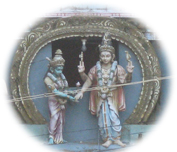 Parvati once expresses her desire to have the experience of an earthly wedding to Shiva. This story is believed to be in fulfillment of this wish expressed by her. A dispute in Mount Kailash occured over a game of chess. In accordance with the verdict of Shiva, Parvati recedes to an earthly life and amidst her wandering reaches a place called Komal, where Lord Vishnu assumes a form of a cowherd to take care of his sister. He releases her from the clutch of the curse in a place called 'Thiruvaaduthurai' and Parvati sheds her assumed cow's form and takes Her normal form in 'Kuthaalam' in the sacrificial fire of Sage Bharata Muni. Shiva and Parvati then unite in marriage in Thirumanancheri. Shiva is also called as 'Sonavaararivaar' for keeping up His word.

God Vishnu, upset over the events, wanted to reconcile the couple. He went to Shiva to justify his case. Shiva told Vishnu about Parvati's wish to experience a wedding on earth and assured Vishnu that all events would lead to that end. He also told Vishnu to take the cow to bathe in the Cauvery so she could regain her original form. Vishnu did so and soon Parvati was herself again.

Parvathi was then instructed to go and live as the daughter of Bharata Muni, a saint living nearby. The story goes that Bharata Muni approached Shiva for his hand in marriage to Parvati, thereby granting her wish that she be married on earth.

Udhvaganathar looks as groom in this moolasthanam and Ambal is bride, God and Goddess exhibits their view of newly married couple status in the south prakaram. Mangala Ragu God exhibits his view of with his full body near Lord Durgadevi in the north prakaram. This scene are giving significance of this temple. In this place Rathi and Manmathan join together. By grace of lord Uthvaganathar Rathi gets Mangalya Pitchai it's hightly belived who ever adorn with garland to the Lord Udhvaganathar and Goddess Kokilambal are relieved from their curse and sin besides gets wedding in an earlier stage.

It is firmly believed even today that those men and women whose marriages are getting delayed due to various circustances, will soon get married if they come to this Sthalam and worhsip God Shiva. Manmadhan is believed to have worshipped God Shiva at this sthalam. The shrine of Thirumananjeri is closely associated with legends that tell the story of Shiva's marriage to Parvati.

The temple is crowded at all times of the year, showing the importance of marriage in our community. One is supposed to offer special prayers to the lord, after which we are given the garlands worn by the god and goddess. We are supposed to keep this carefully till we get married, and then after the marriage, come back to the temple with one’s spouse, wearing the same garlands, and once again offer prayers as thanksgiving.

The place is sung in the Thevaram hymns of Thirugnanasambandar, Thirunavukkarasar and Sundarar. 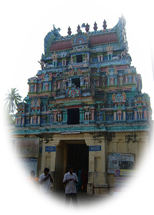 History of Thirumanancheri Temple and Location

This temple is located 6 Kms from Kutthalam. Thirumanancheri is one among the popular temples of Lord Shiva, where He is devotedly worshiped as Kalyanasundareswarar and His consort, mother Parvati as Kokilaambal. The lord in Sanskrit is also called as Uthvaanganathar. In Tamil they are addressed as 'Arul Vallal' and 'Kuyilinmenmozhiammai'. Thirumanancheri temple is where the divine marriage of Shiva and Parvati took place, and today, people flock to this temple, praying for an early marriage, thanking the lord for their marriage, and praying for children. Thirumanancheri is about 6 Kms from Kuttalam, and about 12 Kms from Kanjanur and in the town of Kuttalam, about 26 Kms from Kumbakonam on the road to Mayiladudurai.

This temple is constructed by Chola Queen Sembiyanmadevi during Chola Dynasty. Its being referred Thevara song by the Gnanasambandhar and Thirunavukarasar. This story behind God and Goddess took birth in this earth and wedded, once God Udhvaganathar got angry and cursed Kokilambal and she incarnates the daughter of Bharatvajrishi and married Lord.

It is a holy place where the God and Goddes weds. Goddess Arulmigu Kogilambal born as a cow due to the curse of God Uthvaganathasamy. The cow then born as a daughter of saint Bharatwaja Rishi by worship the God Uthvaganathar. Then she chosen the Lord as her husband and got married as per the local ceremonies and formalities in this place. They have not set eyes on each other but they had set their hearts uinon.

The both present themselves as divine couples, stand with monarc on the south side of the temple, and blessing the devotees. The unmarried bribe and groom devotees who pray the divine couples for the arrangement of their marriage and the same will be settled by the Divine couples at an earliest possible by removing the obstructions which causes for the delayed marriage.

The Lord Kalyanasundarar stands as bridegroom and blessing the devotees. The Goddess Kogilambal seen the foot steps of the Lord by bowing her head with shyness. We can see such as glorious scenes only at this place.

And also the Lord gave 'Mangalya Pichai' to the 'Rathi Deve' and combined the both 'Manmathan and Rathi Devi' in this place.

The Durgai Amman stands in the north side of the Goddess Kokilambal facing north direction. And the 'Raghu Bhagavan' who gave graces for the birth of child stands in the left side.

It is an eye faced truth that the devotees who pray the Lord by offering garlands to the divine couples for wedding ambition the eternal couples bless the devotees with grace to attain their ambition with in a short period after their prayers.

This temple is constructed by Chola Queen Sembiyanmadevi during Chola Dynasty. Its being referred Thevara song by the Gnanasambandhar and Thirunavukarasar. This story behind God and Goddess took birth in this earth and wedded, once God Udhvaganathar got angry and cursed Kokilambal and she incarnates the daughter of Bharatvajrishi and married Lord.

Power of Prayer from Thirumanancheri Temple

After marriage the married couples should come once again to this place and complete their prayer by worshiping the Lord Kalyanasundarar.

The married couples who were separated from their married life for various resons may also come and pray the Lord Kalyanasundara for their unity. This kind of prayer is also conducted in this temple.

Prayer for the Birth of a Child

In this temple there is no 'Raghu Kalam', Emagandam, Ashtami and Navami thithis. In all days the devotees may take part in the devotional prayers.

Arulmigu Uthvaganathasamy Temple is a holy shirine of Lord Kalyanasundarar. This temple is facing East. As soon as we enter the Sanctum after leaving Rajagopuram Lord GAnapathi has embodied himself. Then we can see Thuvajasthambam, Balipeedam, Mahanandhi and Mandapam(Great Hall)

In Niruththa Mandapam Sherr Natarajar Bestows his goodwill in a dancing exposure. In front of Natarajar in the south Praharam Lord Kalyanasundarar stands by embodied the Goddess Ambigai with a laughing expose facing east. The Kalyana Sundarar is the king of monarc and Hero of Lord in the temple.

After getting their good wishes shree Kokilambal Ambigai Sitting in Suhasanam poisture as a bride in the wedding plateform. It is a great feast to our eyes to look after and worship the Goddess.

When we enter to the Inner Praharam we can see the sanctum of four dieties of Samayakkuravar's who propagate salvate in this country in front of the Natarajar Sabai.

In the Kannaimoolai a beautiful Lord vinayagar sannadhi in the western side Karuvarai along with Upaya Nachiar Lord Mahavishnu, Lakshmi sannadhi and also the Idols of Baharatha Maharishi, Sembian Madevi, Mallappa Naicker were installed in the four directions of Karuvarai.

In general this temple is having so many immortal and rate deities to worship and pray for the grant of mercy and blessings of Lords for the Good will of devotees in all aspects in fulfill their ambition.

Weekly Poojas
Due to the welface of the world every Tuesday and Friday Sahasranamam and Lalitha Thiruchathi Archanas will take place. Common prayers also will be conducted.

The devotees can offer 'Ashtothram' and 'Sahasranama Archanais' from 6 a.m to 8.30 p.m every day.