Temple occupies an area of 630 feet South-North and 800ft East-West with adjacent sub lanes and four major streets around. There are four gateways with Gopuram in the big and high compound walls of the temple. Near to the compound walls there is the broad pathway (Praharam) with a flower garden on Northern side. On entering the Eastern gate way, one can find the Vinayaga temple, Balibeedam,

Nandeeswarar Mandabam and Thwaja Sthambam (Flag post ). On the southern side there is the water head with four Mandaps on around with a 100 pillar Mandap in a temple -car style. There are artistic features on its eastern wall. On remaining Area there is a big Car Parking available for the devotees.

The temple structure begins at the Central Gopuram with a long Praharam (pathway) immediately thereafter. There is continuous Mandap structure and in its South-West Corner there is Sri Raaghu Bagavan Sannathi.

Next to this long prakaram , we see front Mandabam where decoration of the Lord and other functions are held. This mandab was constructed by Govinda Dikshidar who was the Chief Minister to King Achuthappa naikar of Thanjavur in 16thCentury. In the front mandab on the eastern side, beautiful artistic pillar with "older and nine horses" design and similar pillars are found on the southern side (at the place of the raised plat form). There is a beautiful Mandab on the northern side with 'Yalli face' pillars where decoration of the idols taken on procession is made. In its western walls, during the renovation works done in 1929, artistic features have been engraved in a magnificent fashion, with the description of the five Moorthi's adorning the place. In the path way to Sannathi, the art work depicting Veda nayakas ,King Sambumali and penance pose of Ambal attract One's attention. The Dwarapalaga Sudhai work (made of Chunam clay) on each side at the entrance to the Swami Sannathi is charmingly big and so well styled that one loses himself at first sight

This temple is considered most sanctified by its presiding deity ( Moorthy ) location ( sthalam ) and sacred water ( theertham ) , and most benevolent because Saiva saints Thirugnana sambanda Swamigal , Thirunavukkarasu Swamigal and Thiru Sundaramoorthy Swamigal have sung in praise of lord siva here, besides being the most worshipful place of legendary fame Saiva saint Sri Sekkizar swamigal who brought out the sacred Saiva text ' Peria Puranam '. This place is one of the 127 worthy places of divine worship spread over the southern bank of River Cauveri. 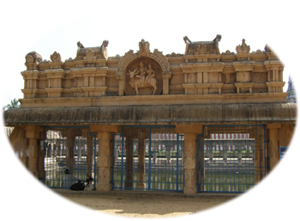 Among the nine worship places, for the nine planets, Thirunageswaram is the place where Raaghu Bagavan is obviously active to bestow his grace. Here Raaghu Bagavan can be seen with his two consorts Nagavalli and Nagakanni together, prayers for fulfillment of desires at this shrine are favorably answered with success. This temple is one where Lord Siva was worshipped by Raaghu Bagavan and got relived of a curse.

Poudiga Purana contains the fact that Lord siva once told his consort Umadevi about Shenbagaraniyam , now called Thirunageswaram and its renown.

At Shenbagaraniyam , under the Shenbagam tree Lord Siva known as Shenbagarane Eswara was gracefully giving bless to devotees. It is here that Nandi (Bull as Lord's mode of conveyance) worshipped the Lord and attained the status as Nandeesan , so too Vinayaga (Lord's first son ) the status of Head of Ganas (Lord's worshipful lot of servants ). Indira (King of Devas ) worshipped Goddess Girigujambal (one adnored with heightened breasts) with Punugu (a rare scent variety) and got relieved of the bad smell emanating from all over his body. Sages Gowthama , Vashista , Parasarar , and Kings Nala , Pandavas and Bageerathan obtained relief after worshipping Sri Naganatha Swami here. Kings of Snakes Aadisesha , Thakshagan and Karkotagan worshipped the Lord here and got blessed It is firmly believed even today that those men and women whose marriages are getting delayed due to various circustances, will soon get married if they come to this Sthalam and worhsip God Shiva. Manmadhan is believed to have worshipped God Shiva at this sthalam. The shrine of Thirumananjeri is closely associated with legends that tell the story of Shiva's marriage to Parvati.

TAMIL MONTH :- (November or December)
This is being performed for ten days ending in the last Sunday of the Tamil month Karthigai . There will be procession of the main deities everyday. On the 5 th day evening the Lord performs archana himself and then in the night comes on precession in Silver Rishaba Vahana with Goddess in four-wheeled thatchs woven beautiful chariot . On the 7 th day , there is Thirukalyana Uthsavam (divine communication), The precession of both the Lord and Goddess in single wooden padichattam ( movable platform carried by men on all four sides) in the night is a feast to the eyes. On the 9 th day there is the procession in the temple charriat ( Thiruther ). In the evening Lord Sri Natarajar will be taken in procession. On the concluding day Sunday , all deities will come in procession round the main streets and the sanctified water will be offered to devotees at the bank of Surya Theertham . Asthradevar will then take a holy dip in the Tank.

On the 11 th day Vidayatri (farewell function) the God and Goddess will be decorated in a flower- pallakku ( Palanguin ) and taken round in procession. There will be Veda Parayanam , Thevaram , Nadaswara recitals ( cutcheries ) every day.

KANDASHASTI: (October or November)
The people of this place belong to Sengunthar sect mostly and Kandashasti Uthsavam is celebrated for six days with procession of the deity everyday. On the sixth day Lord Muruga getting “ Velayudham ” from Goddess is performed in a grand manner. In the night Lord Muruga , with Demon Surapadma proceeding in advance, and Senguntha sect people in various costumes bearing weapons of various description , along with Lord Muruga , will assemble in South Street of this village. In South Street there will be a symbolic fight between Surapadma and Lord Muruga . Navaveerabagu group will sing suitable traditional songs. After fighting in various forms, Like Gaja faced, Lion faced, etc., Surapadma loses the battle , and Lord Muruga wins. This will be in the fashion of olden-day performance of plays in a make-shift wooden platform. 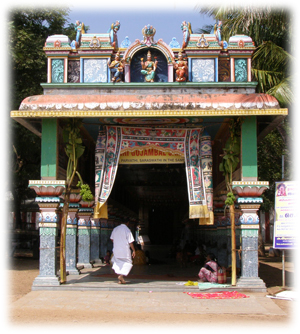 SIVARATHRI: (March)
It is in Thirunageswaram that Raaghu prayed unto the Lord and got relieved of curse on him , on Mahasivarathri day . Hence on this day every year there is Shivarathiri Mahothsavam for three days with abishekam of the Lord using 1008 Conch Shells and every day there will be a grand abisekam and aaradana for Raaghu Bagavan also. In the fourth period of Shivarathiri night, Raaghu Bagavan comes in procession and has darsan of the Lord and gets relieved of the curse. People in large number gather to witness this event.

NAVARATHRI: (NINE NIGHTS)
Navarathri function is performed for ten days for Goddess Girikujambal . Every day Abirami Andaathi Parayanam is done with Sahasranama archana . On Saraswathi pooja day, Lecture of abirami Andaathi is arranged. On Viyayadasami day Lord and Goddess are taken in procession on Horse Vahanam , duty accompanied by grand Nadaswara music performances. There is a function of “throwing arrow” by the Lord ( Ambu Poduthal ) and only after this function people begin their preparatory works relating to Deepavali.

SEKKIZHAR VAIKASI POOJA: (June)
This place being the most sacred one for Sekkizhar Swamigal who wrote Peria Purana , from the year 1969, for the last 37 years, Sekkizhar Vaikasi Poosa celebrations, are being held in a grand manner, with participants like, temple managing crew, Madathipathis of Thirupanandal , Thiruvavaduthurai , Kundrakkudi , Thiruvannamalai Aadeenam , Mandalls performing regular prayers, and temple working staff. There will be musical rendering of Thirumurai and Annadanam etc., everyday. This is being carried out every year for increasing the awareness of Saivism among the people.

RAAGHU SWITCHING OVER TO NEXT RASI:
On every occasion of Raaghu switching over to next book word Rasi once in one and half years in Anti-Clockwise , special Abishekam with Homam etc., is performed and on all the three days Raaghu Bagavan is taken in procession in Sesha Vahaham . People come and have darsan of the Bagavan during this period, and the number is increasing every time.

Thirunageswaram is known as Raaghu Bagavan ( Raaghusthalam ) place among the Nine planetary situations. As per Astrological system , by doing Milk abisekam here for Raaghu during Raaghu kalam (period of 1and 1/2 hours occurring every day ) the delay in getting married; childlessness, trouble some married life, ill-effects of Kalasarpa Dhosha (affliction), Kalasthra Dhosha , Sarpa Dhosha are all cured.

The MILK while being over poured over the idol, turns BLUE even today and it is really to be seen, to be believed . People from far and near throng here for performing MILK Abhisekam and the number is ever increasing. It should be given kept already in one's life to be lucky to visit this shrine, says Appar Swamigal ( Navukkarasar ) in one of his rhymes ( Thevaram ) . If people born in stars ' Rohini ' and ' Aayilyam ' perform Abhisekam etc. for Sri Naganatha swami, they can get cured of bodily ailment and he healthy.

Raaghu Bagavan , is founds in 3rd ,6th and 11th houses from Lagna or in 9th or 10th place at the time of birth according to the horoscope there will be good effect. But if Raaghu Bagavan is found in 2nd ,5th , 7th or 8th place from Lagna it indicates Raaghudhosha (ill-effects).

Raaghu Bagavan generally can be said to be the cause for one's good position, status, business, faithfulness, winning over opposition, to be dept-free, to travel over seas, and for mantra power.